Musical scores as a basis for working with performance, dance, script and sound

Musical scores as a basis for working with dance, performance, script, and sound (hereinafter jointly referred to as the “Musical Scores as a Basis for Working with Body“) is used in this paper as a research form, as all the elements are naturally present when I am creating my performative productions. The pieces I have so far initiated and created along with other artists, initially came out of intuitive sensing of music, creating thus a breeding ground for reflections on other layers of a piece. I suppose that this stems from the fact that I have done piano interpretation for twelve years. Thus, I have gradually realized that linking musical piece or its elements with movement (in the case of synthetic, experimental sounds as well), is based on concentration of basic layers such as tempo, rythm, dynamics, agogic, but other fine nuances which make together a coherent whole and their potential is inexpressible in words. Still, it is tangible – as an experience. Having this in mind, I have decided to research into more detail corelations between music and “body“.

The research was done using musical scores by J. S. Bach “Harpsichord/Piano and Strings Concerto No. 1 in D minor, BWV 1052“. Thanks to a piano interpreter Kamil Mihalov, with whom I have cooperated during our initial research of “Musical Work and its Expansion into Dance Performance“, we added another piece “Chaconne from Violin Partita No. 2 in D minor BWV 1004“ arrangement for solo piano by Ferruccio Busoni.

The research “Musical Scores as a Basis for Working with Dance, Performance, Script, and Sound“ is done by an artist collective Jana Smokoňová – dramaturgist/director and Marek Žoffaj – musicologist/musician, and Katarína Brestovanská/dancer, choreographer. We study the sheet music of “Harpsichord/Piano and Strings Concerto No. 1 in D minor, BWV 1052” in multiple contexts. Specifically, in the context of movement, performance, script, sound and their interpretations in contemporary dance. In this particular musical composition, we read and analyse its graphical record, formal and composition parameters, interpretation principles and aesthetics that were embedded in these pieces by the composer. We intended to transfer such processes into movement scores and express them physically. In addition to our on-site work with dancers and actors, Marek Žoffaj, musicologist and musician, contextualised us with the period in which J. S. Bach composed his works. We perceive his work in historical and musical context, and in the context of psychoacoustic principles of musical perception, analysis of the piece itself and its potential to be transformed into physical expression. At the same time, we strive for the synthesis of musical and movement alphabet. All the attitudes are fully applied in our work with dancers.

When doing the research, I was motivated by an absolute excellence of Bach’s work. I would like to reach out to his excellence. If you have ever listened to Bach’s music, you might feel that it is absolute. When I listen to Bach, I feel as if my brain and body were in balance. I feel complete. As if I were an integral part of the work and historical moment in which the work originated. I am in accord. Of course, each can have a different perception and feelings. And so, following several consultations with musicians interpreting Bach, I have decided to get to the bottom of it. It all started when I had a piano lesson with a musician and piano pedagogist Fero Király. He served this Concerto d-minor by J. S. Bach, and I said, yes. Of course, I can no way perform masterly. But the experience itself helped me to understand and feel the work better. It was the driving force behind my research.

At the moment, we do several research programs with dancers and actors of a physical theatre. We present them informally, as work-in-progress samples

The deliverable from the first research with Kamil Mihalov:
“Musical Work and its Expansion into Dance Performance“ 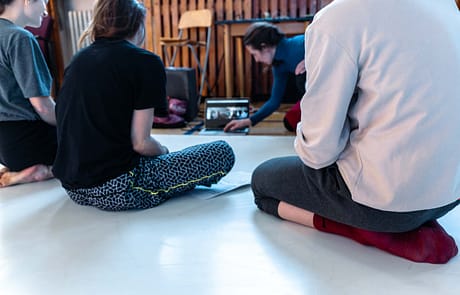 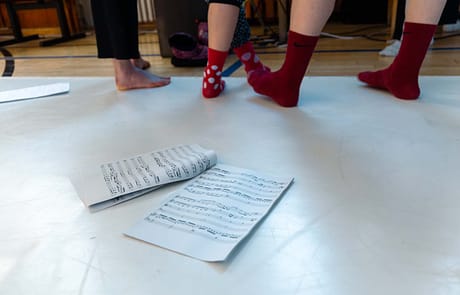 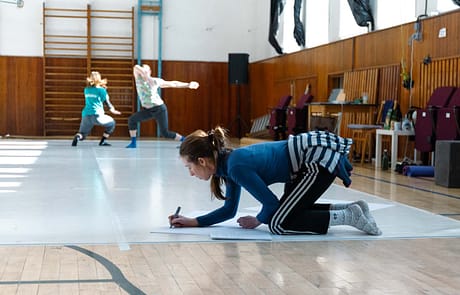 Our partners and supporters:

Page load link
We use cookies on our website to give you the most relevant experience by remembering your preferences and repeat visits. By clicking “Accept All”, you consent to the use of ALL the cookies. However, you may visit "Cookie Settings" to provide a controlled consent.
Reject AllCookie SettingsAccept All
Manage consent

This website uses cookies to improve your experience while you navigate through the website. Out of these, the cookies that are categorized as necessary are stored on your browser as they are essential for the working of basic functionalities of the website. We also use third-party cookies that help us analyze and understand how you use this website. These cookies will be stored in your browser only with your consent. You also have the option to opt-out of these cookies. But opting out of some of these cookies may affect your browsing experience.
Necessary Always Enabled
Necessary cookies are absolutely essential for the website to function properly. These cookies ensure basic functionalities and security features of the website, anonymously.
Functional
Functional cookies help to perform certain functionalities like sharing the content of the website on social media platforms, collect feedbacks, and other third-party features.
Performance
Performance cookies are used to understand and analyze the key performance indexes of the website which helps in delivering a better user experience for the visitors.
Analytics
Analytical cookies are used to understand how visitors interact with the website. These cookies help provide information on metrics the number of visitors, bounce rate, traffic source, etc.
Advertisement
Advertisement cookies are used to provide visitors with relevant ads and marketing campaigns. These cookies track visitors across websites and collect information to provide customized ads.
Others
Other uncategorized cookies are those that are being analyzed and have not been classified into a category as yet.
SAVE & ACCEPT
Powered by
Go to Top